Sharon Marie Tate was born in Dallas, Texas on January 24, 1943. Her parents, Doris Gwendolyn Willet and Paul James Tate, had married the previous year. Doris was a "southern belle, gracious and charming" and Paul "filled with patriotism, had joined the ranks of the United States Army", working his way up to Colonel. Moving from different military bases throughout the U.S. and Europe, the Tate family grew to include two more daughters, Debra and Patti.

As a teenager, Sharon began modeling and competing in beauty pageants. Winning such events wasn't anything new for her; when she was only six months old she was named Miss Tiny Tot of Dallas. In 1960, Paul was relocated to an Army base in Verona, Italy. There Sharon attended Vincenza American High School and became a very active student, joining the Library club, the Student Council, the Cheerleading squad and eventually becoming the school's very first Homecoming Queen. Things seemed to be going well for Sharon in Italy, she soon found herself speaking Italian fluently. But just as things appeared like they couldn't get any better, she fell victim to a date rape, which she kept to herself because she was afraid it would bring shame to her family's name.

Paul Newman, Richard Beymer, and Susan Strasberg were filming the movie, Adventures of A Young Man in a town nearby Verona. With a group of friends, Sharon came upon the movie set and caught Richard Beymer's eye. He invited her to lunch and gave her his agent's number telling her to contact him if she was ever in the States. Sharon's brushes with stardom continued, she got work as an extra in the movie Barrabas, as well as a Pat Boone special. Meanwhile, she continued to see Beymer while he was in Italy filming.

In 1962, Paul was promoted to Major and reassigned to Fort McArthur in California. Sharon - who while dating Richard Beymer had started seriously considering a career in acting - hitchhiked down to Hollywood and contacted Beymer's agent Hal Gefsky. Sharon started doing Television commercials while Gefsky shopped her around town eventually landing her a deal with Martin Ransohoff, CEO of Filmways. Ransohoff signed Sharon to a seven-year Filmways contract. Immediately she was tested for a role on Paul Henning's Beverly Hillbilly's spin-off Petticoat Junction. However, Sharon's lack of acting experience kept her from the part, so Ransohoff decided to put her career on hold. Instead Filmways decided to invest in Sharon, spending over $100,000 on her. In-between photo shoots she would take acting, singing, and dancing lessons. As well as spending hours each week in the gym with physical trainers, and in speech classes with vocal coaches.

Sharon began dating a French actor named Philippe Forquet. Both Sharon's parents and Martin Ransohoff disapproved of the relationship; both felt that Forquet would stand in the way of her career. Meanwhile, Sharon was given a small walk-on role on the Mister Ed show. It went well enough for Ransohoff to allow her to take a small reoccurring role on The Beverly Hillbillies. This role was strictly for her to get a little practice. Sharon wore a black wig and was unbilled on the show because Ransohoff wanted to make her a movie star, the next Marilyn Monroe, and as he once said, it is almost impossible to launch someone twice. Forquet proposed to Sharon and she happily accepted. Their love affair was intense but it was far from perfect, they fought, and not just with words. One physical altercation landed her in the UCLA medical center. They remained together for about a year, and in the end Forquet was the one to leave.

On Thanksgiving of 1964, Sharon met Hollywood hair stylist Jay Sebring at a party thrown by the owner of the Whiskey A-Go-Go. The two hit it off quite well, almost immediately becoming inseparable. He gave her the royal treatment like only a man of his refinement could. The two did everything together, whether it was eating at the best restaurants, attending various Hollywood parties, or experimenting with psychedelic drugs like LSD. Sharon's parents were quite impressed with Sebring; both seemed to agree that he treated Sharon well.

Thirteen was an eerie suspense film directed by J. Lee Thompson, about a cult that preformed ritual human sacrifice to guarantee a lavish grape harvest. Starring in the picture, were David Niven, Kim Novak, and David Hemmings. Ransohoff decided to make this Sharon's big screen debut and secured her the role of Odile, a witch with mysterious powers. Midway through filming Kim Novak injured her back and was replaced by Deborah Kerr.

Sharon's second film was a vampire spoof titled The Fearless Vampire Killers, sometimes-called Pardon Me, But Your Teeth Are In My Neck, or The Dance of the Vampires. Playing the part of Sarah, she is kidnapped by a group of vampires and eventually rescued by a bumbling professor and his assistant. While filming the picture, a romance blossomed between Sharon and director Roman Polanski. She broke the news to Jay Sebring over the phone, and he immediately rushed off to London determined to win her back. It was a lost cause; Sharon insisted her love for Roman was genuine. Still, Jay demanded to meet Roman, just to make sure he was worthy of her. The three had dinner, and by the end of the night, Jay reluctantly gave his approval.

Alfred Hitchcock passed at the opportunity to direct Rosemary's Baby, so Paramount quickly contracted Roman for the job. Sharon began searching around L.A. for a place for her and Roman to live while he worked on the film; finally settling on a rented mansion at 1038 Palisades Beach Road, right on Santa Monica Beach. Roman originally wanted to cast Sharon for the female lead in Rosemary's Baby, but because she was his girlfriend, he didn't want to be the one to propose the idea. No one at Paramount suggested it, and Mia Farrow was eventually signed on to the deal.

Twentieth Century Fox cast Sharon in their film version of Jacqueline Susann's bestseller, Valley of the Dolls. The story followed the rise and fall of three women in the world of entertainment. Sharon's character, Jennifer North, was that of a showgirl whose career was totally centered on her stunning looks. According to Roman, Sharon "dismissed it as an exploitation picture and felt she wasn't doing anything artistically worthwhile." After moving out of their Santa Monica beach house, Roman and Sharon moved from hotel room to hotel room, until Patty Duke suggested they move into her SummitRidge Drive home, since she wasn't using it. By the end of 1967 Valley of the Dolls, Don't Make Waves, The Fearless Vampire Killers, and Thirteen - which had been renamed Eye of the Devil when distributors became superstitious about titling the film such an unlucky number - had all been released.

Roman and Sharon married in London on Saturday, January 20, 1968. The star-studded wedding was followed by a reception at the Playboy club, a Supremes concert, and a honeymoon in the Alps.

Sharon was unhappy with the way Martin Ransohoff had managed her career. She decided to meet with him to try to get out of her multi-picture agreement. He agreed to let her out of the Filmways contract, but at a price; Ransohoff would collect a percentage of her earnings for the next four years. Freed from Filmways, Sharon was signed by Columbia Pictures to star in The Wrecking Crew, the last film of the Matt Helm series, which also featured Dean Martin, Tina Louise, and Elke Sommer. Sharon played the part of Freya Carson, a clumsy agent sent to assist Helm. The part called for her to perform a few fight scenes, so Columbia hired Bruce Lee to give her Martial Arts lessons. The film was neither a critical or financial success however Sharon enjoyed the work, and got some favorable press from the media.

In early 1969, Patty Duke told Roman and Sharon that she needed her SummitRidge house back. So once again, Sharon began searching around L.A. for a place to live, finally landing on the perfect house, a cul-de-sac on Cielo Drive in Benedict Canyon. It was around this time she found out she was pregnant. Fearing that Roman would make her get an abortion, she kept the news to herself.

In March of 1969, Sharon flew to Italy to film the motion picture The Thirteen Chairs. The movie, which was sometimes titled 12 + 1, starred Orson Wells and Vittorio Gassman. Sharon played the part of Pat, a scheming saleswoman working in an antique shop that gets involved in a wild goose chase, looking for a fortune hidden within an old chair. Before leaving for Italy, Sharon finally told Roman that she was pregnant, and he wasn't happy. Roman was clear that he never wanted children. The experience of growing up in occupied Poland had forever scarred him, he felt the world was too violent, and too cruel, to bring a child into. However, as the months passed, he became excited about becoming a father. Meanwhile, Sharon, who was eagerly awaiting the birth of her first child, finished filming The Thirteen Chairs and made it back to the States in time to watch the moon landing.

Roman Polanski was never faithful to Sharon Tate. Not when they were dating, and not after they were married. She had always told Roman that she didn't want to change him, but she always hoped that he himself would change. She tried her best to ignore his philandering ways, but it was taking a toll on her. Some of her friends would later suggest that Sharon planned to leave Roman. However, even if she had intended to, she would never get the chance.

On August 8, 1969, Sharon Tate and Jay Sebring joined Wojciech Frykowski and Abigail Folger, for dinner at El Coyote, a Mexican restaurant on Beverly Boulevard. Afterwhich, the four returned back to the Cielo Drive house. Wojciech fell asleep on the living room couch, Abigail retired to her bedroom to read a book, while Jay sat and talked with Sharon in her bedroom. Shortly after midnight Susan Atkins entered the room with a buck knife in hand. She instructed Sharon and Jay to come into the living room. There, Charles "Tex" Watson tied a rope around Jay's neck and looped it over the ceiling beam, then tied it around Sharon's neck. Jay started arguing with Watson, after Tex ordered them all to lie down on their stomachs. Sebring was shot immediately and chaos ensued. Still tied up, Sharon sobbed and pled with the killers to let her have her baby. After all the others were killed, Watson and Atkins stabbed Sharon to death, as she cried out for her mother. 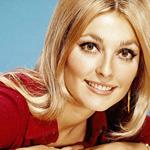 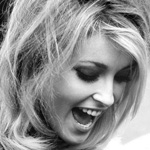 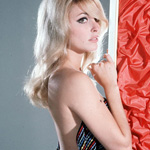 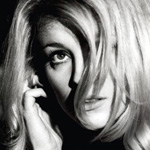 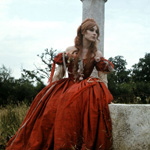 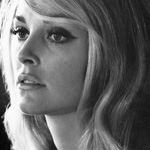 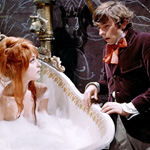 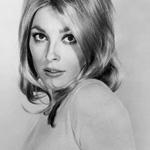 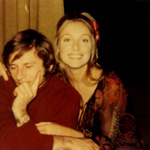 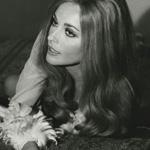 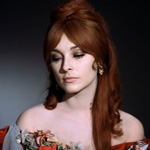 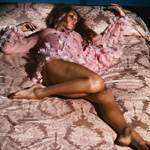 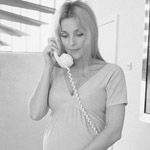